Halloween is upon us!

Yesterday was the middle school craft fair. It was... um... fun? Actually, it was slow. There wasn't a lot of traffic, and most of the kids were either on their way to soccer games or had just come from them. Apparently, soccer's a hot sport at this school.
I do a great flaming soccer ball, but none of these kids came over to find out.
I did paint this beautiful little girl, who later came back for a glitter tattoo as well. 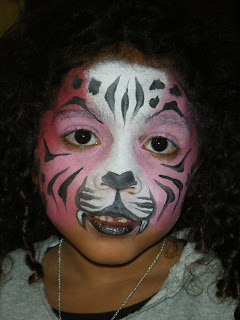 That tiger was my only painting of the day; the rest of my few customers wanted glitter tattoos. She was so happy, though, and should've been a great advertisement!
Today, after rehearsal for the community theater show I'll be in in November, I rushed to a birthday party in Cedar Grove, NJ to paint. The mom originally wanted a clown, but I wouldn't have had time to get into clown between the two obligations. Instead, I suggested a Hogwarts student, wherein I do my best Hermione Granger impersonation, completely with really bad fake British accent. Heck, I've got the hair for it. And the cloak, tie, scarf, and wand as well.

The party was a first birthday for a boy with a huge family, and it was Halloween-themed.
I was a hit, though I did feel bad that two boys thought I was a magician when I first arrived, one volunteering to let me saw him in half.
I'm definitely going to start studying my magic books.
This party was phenomenal. The food smelled amazing, the DJ had the party rocking, and halfway through my two hours a Uruguayan drum and dance troupe arrived to really liven the place up. I've never seen anything like it, certainly not at a first birthday.
Most of the kids were in costume for the Halloween theme, as were some of the adults, but I was surprised most didn't want me to paint to match their costumes. They got all different faces. I did finally convince one wonderful little boy, who was very happy with the result, as was his mom. 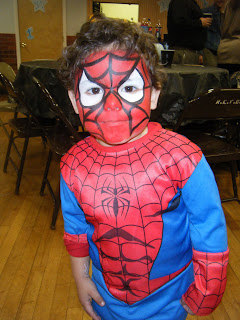 Young as he was, I have to say, he's the least squirmy canvas I've had in months! He was so good, and so patient, letting me work my "magic."
(Shameless plug: This is what I can do for you on Halloween if you make an appointment!)
One other boy had a funny idea: he wanted a syringe on his arm, with green fluid in it, labeled "Swine Flu." Funny. Well, once I heard that, I asked him to let me take some liberties, and asked if it was OK to use pink (since pigs are pink, after all). This very bright boy said, "Pink's fine. There really are no 'boy colors' and 'girl colors' anyway. They're just colors." Brilliant!
And the result: