I saw this posted online today:

Posted by NJ Face Painter at 1:39 PM No comments:

It's all incredibly exciting!

I have been hired by the Tribeca Film Festival to face paint!

On May 1, 2010, the last day of the Festival, they hold a Family Festival & Street Fair, and that's where I'll be painting.

I'll be stationed at Washington Market Park, near the playground, painting my little heart out.  The park is on Greenwich Street between Duane and Chambers Streets.

I can't possibly convey how excited I am about this.  If you're in the area, come visit!  I'll be there from 12-4 p.m. at a minimum, and possibly for more hours than that.

OK, I'm from NJ, I know.  And I'm really a Devils fan.  But I married a Rangers fan, and since we met, he'd been talking about me painting a Rangers jersey on his all-white cat, Neptune.  Neptune, in addition to being all white, is a lump.  He's a sweetheart, snuggly, and likes to lie around.  You can mush him to bits and he doesn't care.

So we figured it'd work fine.

Weeeeeeeeeeeeeeeell... we found out that Neptune is a little squirmy when being painted for any length of time.  I should've known; he will only take licking/cleaning from his sister Catimus for so long before walking away, and I imagine this felt similar.  Don't worry, I used all Snazaroo, it's perfectly safe.  Child toy safety rated, even.  And no animals - not even Neptune - were harmed in the painting of this cat or taking of the photos. 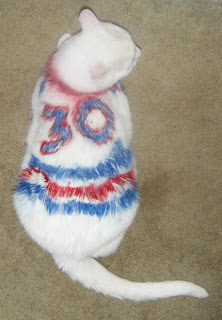 Almost none.  My dog, Meg's, feelings were hurt, but she gets like that any time I pay too much attention to one of the cats.  But that's it, I promise.  And even that was fixed; I painted her head with a NJ Devils logo (not my best work, I admit), and she just lay there the whole time, happy for the attention. 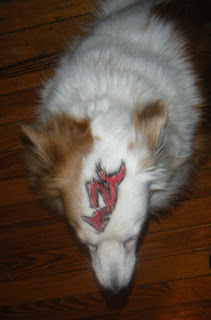 Those sharp edges are just not easy on fur!
Posted by NJ Face Painter at 9:55 PM 2 comments:

I can draw.  I know this.  I forget it sometimes, because as a face painter, I don't always need to actually draw.  Yes, I use elements and techniques from my zillion years of art classes to turn your child into a tiger like the one on the banner of this blog, but there's a difference between turning someone into something and drawing it.
When face painting, I've focused on the former and avoided the latter.  For me, the former is easier and faster.  And it's usually more fun for my model!  Who wouldn't want to be a tiger, rather than just having one on his face?  Plus, it's got that "wow" factor that everyone loves to have at a party.

Sometimes, though, a child wants a painting on his or her hand or arm.  Or mom wants cheek art so she doesn't have to wash her child's whole face, even if my paints are easy to wash off.  So I need to be able to draw!

When I've been doing a lot of full-face painting, I sometimes forget that I can draw.  That's silly, I know, since I started taking art classes at age 5.  Of course I can draw!  Look at this lemur I did for my husband at his request. 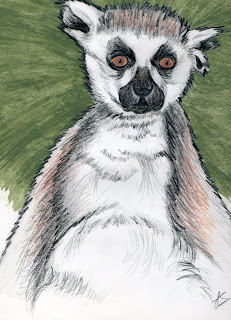 And then I redrew it for him, in black and white. I drew him another one too. 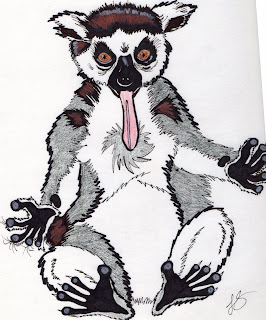 They look crazy, I know.  I can "draw" when it comes to the face paints too.  After all, I did this dragon, which won me an Honorable Mention in an international competition (3rd row down on the right).

And I made up this cute monster guy while I was at a slow festival one day, and just goofing. 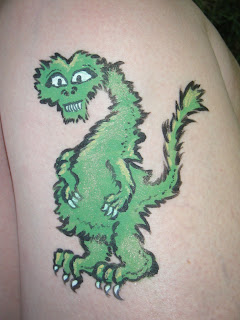 And I can putll out some strange things when challenged, like that seal I did at the Audubon Zoo.

Sometimes, though, I just draw a blank.  Or when I'm working and moving quickly, I end up doing the same sort of thing over and over.  For instance, flowers.  There are so many species of flowers, but when I'm moving fast, my flowers can bcome annoyingly generic.  The only way to combat this is to practice when I'm not under the gun, with a squirmy kid wanting to be done and get out of my chair and twenty more waiting to get in.  So I took some time today to practice.  And the results, in the flower category: 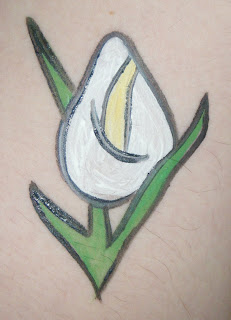 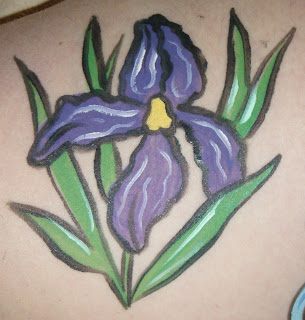 Next on my list was a sunnny yellow daisy. 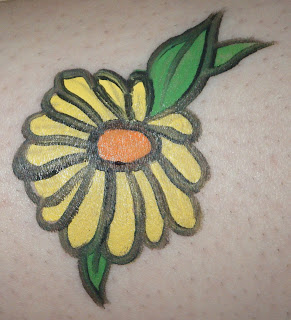 And this little guy.  A forget-me-not, I think. 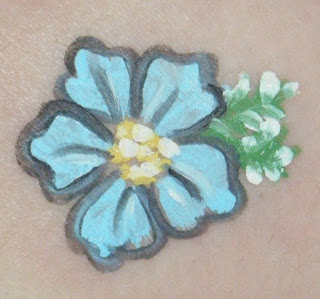 We have variety!  I didn't stop at flower, though.  While I can and have drawn a dinosaur before, I wanted some new ones of those too.  So here are two new cute dinosaurs, too, a stegosaurus and triceratops. 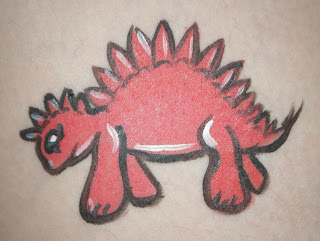 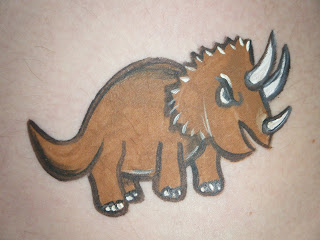 I also tried some other critters, a lizard different from my usual, a frog, also new for me, and a seahorse.  I love seahorses and am actually getting a tank ready so I can own some real ones! 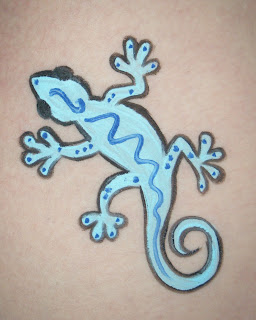 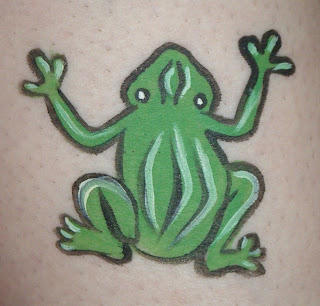 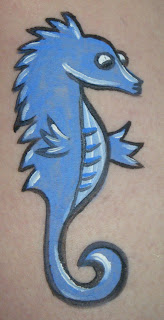 Continuing with the sea theme, some shells. 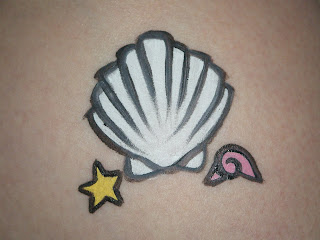 That'll be great when I do mermaid princesses too!  I'm also constantly getting asked for trains.  I had a train, but it was nothing I was proud of.  This one is much cuter! 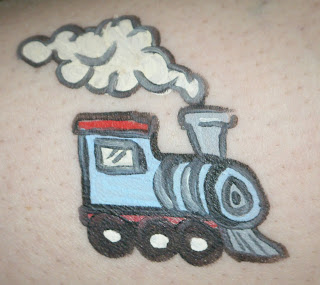 And a for good measure, a couple more things that'd be handy to have in my repertoire. 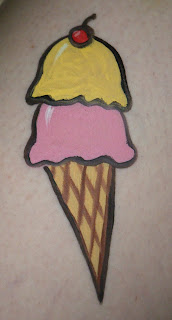 Perfect for summer, that one is! 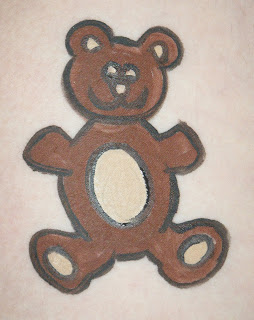 There's tons more I could practice, of course, but I've gotten hungry and it's a beautiful day out.  I may get a late lunch, and take the puppy for a walk.
'Til next time!
Posted by NJ Face Painter at 4:04 PM 2 comments:

A fellow face painter, Daniel Lasris, also known as Katmandew, has decided to do his part for World Autism Awareness Day, which is today, April 2, 2010.  The color of awareness is blue.

Therefore, Daniel has asked that we face painters paint some part of ourselves or each other blue and upload it to the Facebook Fan Page he has created.  He's going to take all of the photos he receives, upload them to a Shutterfly.com share site, and then create a book from the photographs submitted.  All proceeds from the sale of the book will go to Autism Speaks, and the organization plans to match the donation 100%!

I have submitted this photo, my blue faerie face. 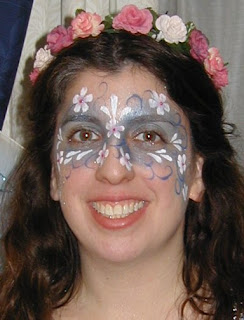 It's the one blue face I know I have on short notice.  Plus, I really kinda love it.

If you'd like to learn more about the organization or donate to Autism Speaks, please visit their website for information.
Posted by NJ Face Painter at 12:41 AM 4 comments:

It's Fine if You Don't Mind

This past Saturday, I painted faces at a 5th birthday party in River Edge, NJ. It was a great party, but I didn't have time for photos, so there aren't any of those. Sorry!

It did bring up an interesting issue, though, so I thought I might want to give you some pointers for when you're having an entertainer at your party. This is relevant for hiring face painters, magicians, caricature artists, anybody...

The party was at a dojo (karate school), and was amazing fun for the kids. Don't get me wrong, it was great fun for me too! Heck, I used to take karate as a kid myself, so it was fun even to reminisce.

Thing is, the family planned for me to be there right when the party started. So I got there and set up, and was ready to go in a back room next to the party room. What I didn't know was that the parties at that school have a standard format (as well they should, but I'd never before done a karate party), during which the sensei (teacher) has the kids participate in a series of games and exercises for about 1.5 hours before going to the party room.

It included breaking boards, so it was very cool for the kids, and I can't wail 'til my nephew's old enough to have a party like that!

Thing is, for the first hour or so of the party, I was just hanging around, being entertained by the sensei and kids, but not working.  It so happened that this particular family wasn't worried about it and was able to add an hour onto my time to make sure that no kids left unpainted.  That's terrific, but most families simply can't afford that, and I'd hate for them to be put in the position of having to choose what to do about it.  Also, it was lucky that I didn't have another obligation immediately after that party; it can happen that I have five parties in one weekend and can't really stay later at any of them.

All in all, it was great to be there; the family was very nice, the kids were wonderful, the other guests great, and I even got some ice cream cake!

This is just a reminder to the rest of you... when planning  your parties, if you don't want an entertainer to have down time, go over the party schedule with your entertainer when booking so you can work out together the best possible way to handle things.
Posted by NJ Face Painter at 2:06 PM No comments: