I'll start by saying I'm not a parent.  I don't pretend to be able to tell you all how to do your job.  In fact, I watch my nephew just one day a week, and I see how hard it is, how tiring, and how wonderful - and he's only 8 months old!  He's not even running around yet, or talking.

So I get it, and I won't pretend to know more than you parents.

I do notice things, though.

I consider my area as a face painter to be a "good manners" zone.  When I tell kids to refrain from leaning on my table, I expect them to listen.  I completely understand them forgetting, and know how tempting it is to lean - I'm a leaner myself.  So I'm not worried about those kids.  But I've had the occasional event where the kids set out to disobey, and purposely shake my table, which is a light aluminum camping table, just to be contrary.

I've seen kids try to cut in line and shove other kids around, and I'll quickly let them know that no one who misbehaves is eligible to be painted.

I tell kids who curse that they need to stop or they won't get painted.

My space, my rules.  And I refuse to reward bad behavior.

Apparently, despite my inexperience, I'm doing things right.  According to this article, parents really do need to be the boss.  I personally see that as extending to all adults in authority - teachers, coaches, and yes, face painters.  No, I'm not about to take over your job.  And I'm not about to tell you you're doing it wrong.  But the author of this article does seem to have some good thoughts on the subject.  The blog in general is a useful resource.  Hope it helps someone out there reading this.


Posted by NJ Face Painter at 3:06 PM No comments:

A Beautiful Day for a Birthday

This past Saturday, I painted at a joint birthday for two siblings, one 4 and one 8, who shared a birthday. They actually have four other siblings!  (More power to their parents!)

The family was great, and there were a ton of people there, attending in the park in Newark.  As I pulled up and parked my car, the dad and grandma setting up accidentally let go the bunch of balloons that was supposed to decorate, but luckily they got caught in a tree, so they still decorated the party... you just had to look up to see them.

I set up my stuff, and almost immediately got to work.  Adults, kids, everyone was into it, so I had a lot of work to do.  Some of the kids even got painted multiple times, like this pink kitty with flowered arms. 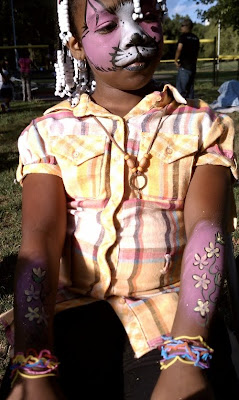 We decided on flowered arms with a pink background when she wanted both kitten paws and flowers on her arms.  So I explained that the kitten was walking through the garden, and you could see the pink paws through the flowers.

The birthday boy, age 4, chose a red Spiderman, so one of the other boys in line after him responded with a request for a black Spiderman.

And more variations on a theme... a pink puppy that later led to a standard brown one.

And the birthday girl, age 8, who was actually first on my line, got a cheetah, inspiring her friend to do the same.  There were very few duplicates at this party, which made it more fun for me, but this one allowed me to get this great shot of these two sassy cheetahs, double trouble if I ever saw it. 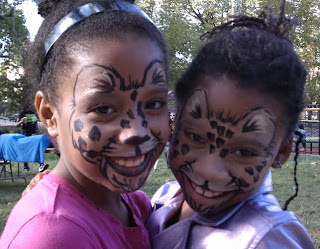 That's the birthday girl there on the left.  It was so atypical, that I only had one single butterfly! 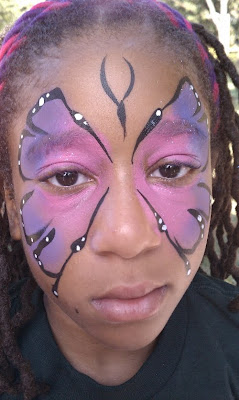 Flowers were a hit that day, from this little rose princess, who specified that she wanted three flowers. 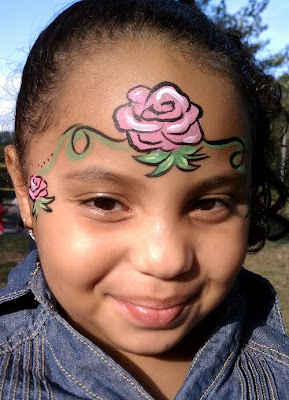 To the birthday kids' great grandma, who asked for a single rose. 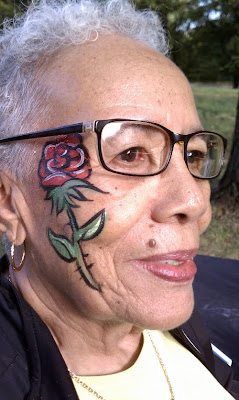 And yes, I said great grandma.  How cool is that?

There were also the arm flowers (and butterflies) I did on this two-year-old and the face of flowers on one of the adults in the bunch.

Other adults asked for cheek art depicting their favorite things, like this stiletto heel and this hat, which matched the hat she was wearing.

I love it when I get to take a request and run with it, like this heart princess, who just asked for a simple heart.  When I suggested the princess, and then showed her the finished product, she was ecstatic. 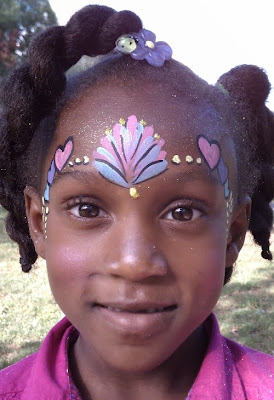 On the other end of the spectrum, a skull request from a young man who graciously waited on line while on crutches, pretty much without complaint. 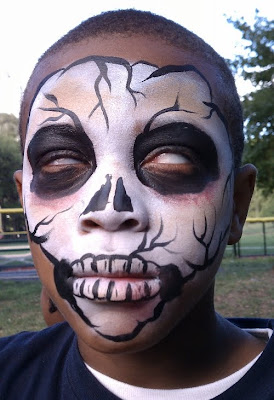 He also had the dubious talent of being able to roll his eyes back in his head.  While it freaks me out, it does make for a really nifty photo!

And somewhere in the middle of the road, a tiger and a zebra - my first zebra request in years!

And just look at that blue sky behind them!  They got so lucky with the weather for a large outdoor party, it was great.
Posted by NJ Face Painter at 1:09 PM 1 comment:

A Message for Your Kids

It's hard for me to believe that Sesame Street hit the airwaves only a year before I was born, but it definitely was a huge part of my youth, and then of my sister's seven years later.  I love that it's still on TV, as it's quality children's programming, rather than some of the garbage that's out there.  And I love that it's still fresh.

So fresh, in fact, that Will.I.Am from Black Eyed Peas (one of my favorite bands) apparently appeared on the show!  And he had a great message for the kiddies.  Here, watch.  And then have your kids watch too.

Posted by NJ Face Painter at 10:43 AM No comments:

Not mine... obviously.  But I painted at a fifth birthday this Saturday.  In the background, I could hear the birthday girl's dad playing fun games with the kids, like pin the nose on the clown and "freeze dance."  The family had also gotten a new puppy, so the kids lined up to meet her.

Meanwhile, I did this... 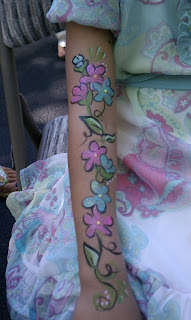 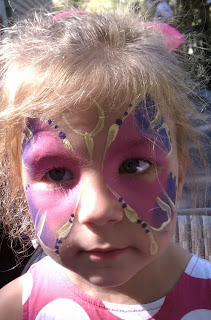 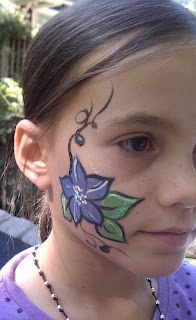 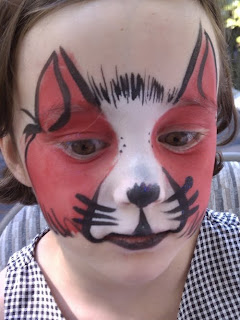 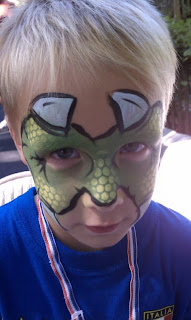 And a good time was had by all!
Posted by NJ Face Painter at 11:38 PM No comments:

Yesterday was the Rutherford Street Fair, a very large fair at which my mother has been telling  me I should be painting for years now, but I've always had other gigs that day.  Besides, they've already got a couple of regular face painters, though from what I understand one will no longer be there after this season.  She's just not in the mood to do fairs anymore, and that's reasonable.

It's a tough kind of day, painting at a fair.  For birthday parties, I normally arrive 10-30 minutes before my start time to set up.  That's all I really need.  Well, with street fairs, they need all the cars off the street by a certain time, and I'm not just bringing my table, chairs, and kit.  I'm bringing my 10x10' canopy, my glitter tattoo and face painting kits with a table for each, and all of my signage.  It's a lot.  Heck, my canopy, which claims to be "easy" (it's a lie) requires help to set up!

Then I'm painting for 7 hours straight, usually with no breaks, and then have to take everything down and pack it up again.  There's a risk, too.  What if the fair is small and no one shows up?  What if too many people just aren't in the mood for body art?  What if it's pouring rain or deathly hot?

So I can see why this other face painter may be tired of it.  It's a lot of work, but I'm still at a point where I really do love it.  Plus, when it's a big fair I bring Eric with me to help.  He can help me set up and tear down, and talk to the parents and kids who're waiting while I'm painting, so everyone stays entertained.

Yesterday was different, though.  Yesterday I was actually asked to come and paint on behalf of Giants of Generosity.

It's a really nifty group (definitely check out their website) that really just finds random people in need and gives them a hand.  As they state it, "Our mission is to respond to the most pressing needs of people who are experiencing desperate times, right here in our own communities."

Who can argue with that?

When a man landed in the hospital with severe injuries after trying to assist a woman who was being attacked, they paid his medical bills.  That's the sort of thing they do.

So they paid for my booth at the fair, and in return I donated back 40% of my proceeds from painting yesterday.  It was a slightly slower day for me, unfortunately, so that amounted to $150, but I was glad to be able to give that to them in addition to the donations they were taking at their own separate booth.

I did a lot of painting and a few tattoos, and here are some of the fun ones... 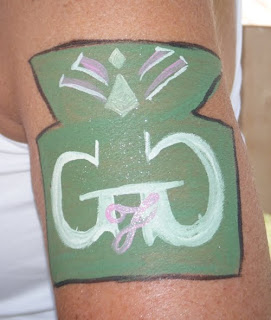 I did this GoG logo on one of the volunteers at their table.  Lettering's not my strong suit, but I think it came out pretty good! 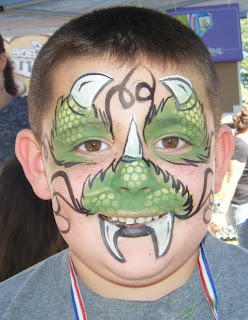 This boy's mom was skeptical about his desire to become a dragon until she saw his face.  Then even she was a fan.  He absolutely loved it. 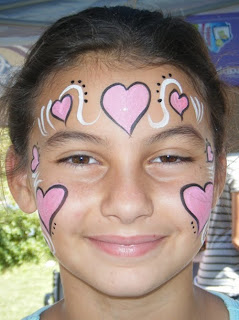 This young lady just wanted a heart on her cheek, but you know I can't stop with just that.  So she got to be a heart princess instead.  When she saw the mirror, she was ecstatic with the improvements. 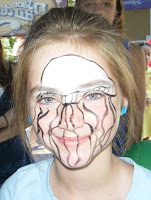 These two were funny.  They came up together in a group of giggly girls, wanting a butterfly and... wait for it... a jellyfish.  A jellyfish?  Heck, I'll try anything once, and they were happy.  To her, jellyfish are pretty, and I did make it shimmery of course.

Personally, they freak me out.  Seriously, I don't understand them.  Where are the parts?  Where's the brain?  Eyes?  How does it think?  Ah, to each her own. 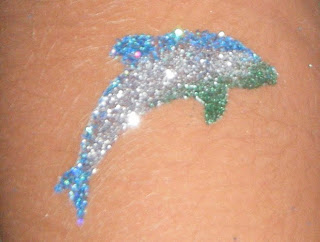 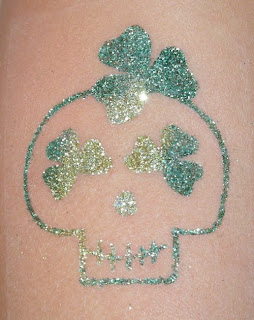 I had a few takers for the glitter tattoos, like this dolphin and the Irish skull. 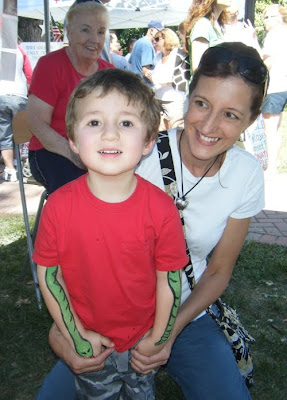 The most fun thing of the day, though, was that my friends Denise and Bill came to the fair with their son, Kody, not knowing I'd be there.  I painted at Kody's first birthay, but of course now that he's almost 3, he doesn't remember that.  He had me do a snake on his arms, and loved how it's running up one arm and down the other, so it looks like it's running right through his shirt.

A lot of people thanked me for being there and for helping out such a great charity, and it felt great.  I hope they have me back next year!
Posted by NJ Face Painter at 11:20 AM 2 comments:

From Girls to Ghouls

I face painted this afternoon at the Ridgewood Country Club for their Labor Day party.  In amongst my usual fare of dolphins and skulls were these adorable kittens. 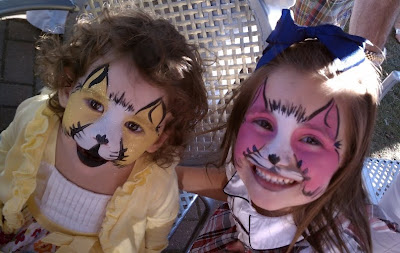 On the other end of the spectrum were this scary clown... 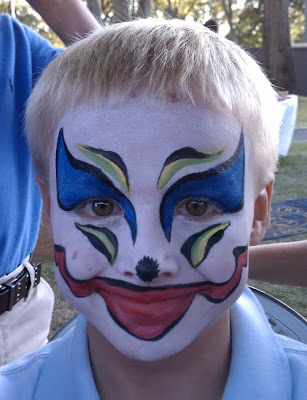 ... and this adorable (and yet scary) zombie. 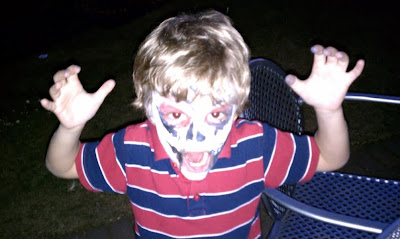 It's a terrible photo, but I so love it when they get into character.
Posted by NJ Face Painter at 10:13 PM No comments: