I'd kept today free for other things, but when I got a call this morning from a former client who'd had me paint at a baptism two years ago, needing a last-minute face painter because the rain canceled the bounce house, I decided to take the party.

It was a 3rd birthday for a beautiful and decisive little girl who knew even when her mom was on the phone with me at 9 a.m. that she wanted to be a tiger.  Unwavering, when I got to the party at 2 p.m., "tiger" was still the request.  And a tiger she was.  A happy one, even. 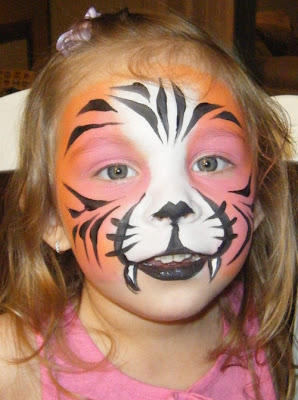 This was a creative bunch; my next customer wanted to be a brown gorilla.  This face got a heck of a reaction. 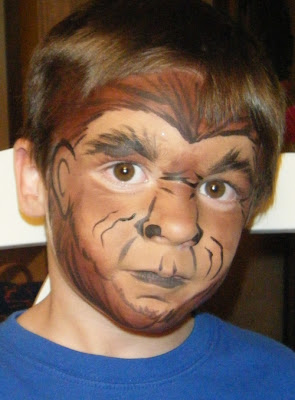 His older brother also had his idea from the very beginning, a snake.  They all freaked out at the eyes on the eyes (my first time doing this!), and the one negative was that he couldn't see 'em in the mirror.  But his mom took photos with his eyes closed for him to have. 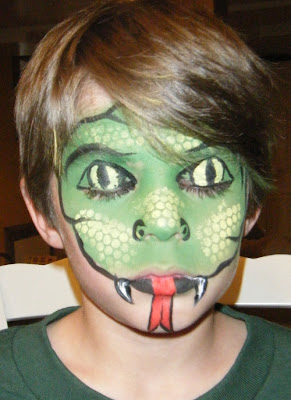 I also had another zombie... you know I love doing those!  He wanted lots of blood.  I think it's even better with that hairdo! 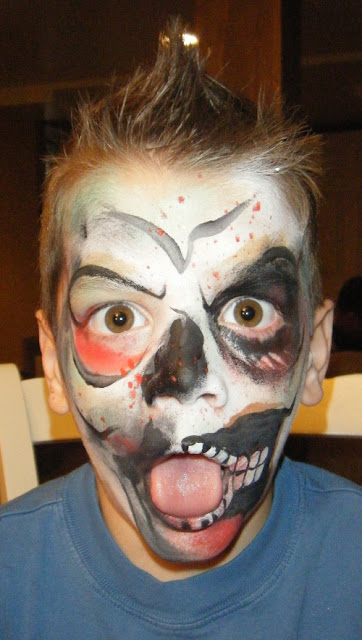 Is it me, or is that kid headed for a rock band when he hits high school?

The older girls got mostly arm art, including this heart made of hearts, by request. 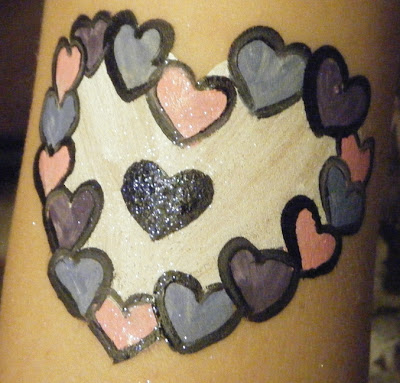 But this chick told me to surprise her.  It was fun painting while she tried to guess what I was doing.  Once someone told her it was undersea, though, she figured out that the grey I'd used was a shark and she requested a jellyfish and a crab, both of which I incorporated. 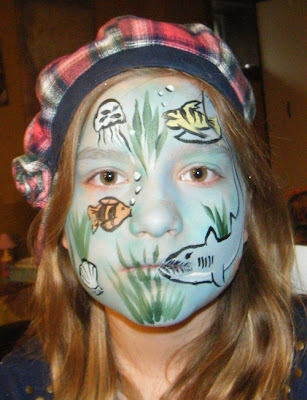 She kept a straight face for the photo, but loved it otherwise!

I really am glad I had a free day and decided to go to the party.  It was such a great bunch of people.

The Tribeca Film Festival Kid's Day was Saturday, and this time I was there from 10 a.m. to 6 p.m., working nonstop!  It was crazy, with people waiting for me for over an hour.

When I first got there, my station in Washington Market Park didn't have a table and chair yet, so I took a few flower and "beautiful day" photos. 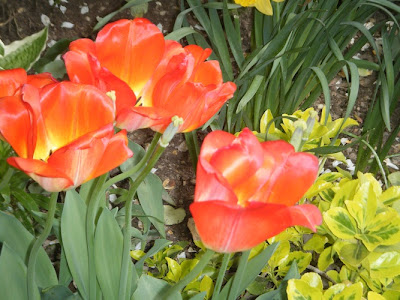 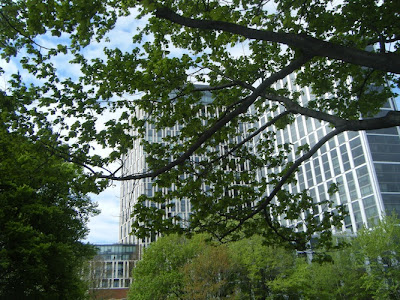 Just as I finished setting up, a short line started to form... that didn't stay short!  One of the very first "customers" I had wanted to be a vampire. A girl after my own heart. My vampire face changes every time I paint it, so this is the one I did early yesterday. 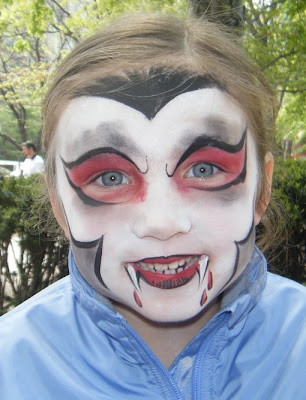 I was happy with it, and she loved it, but I think I improved upon it later in the day, when this boy also asked to be a vampire. 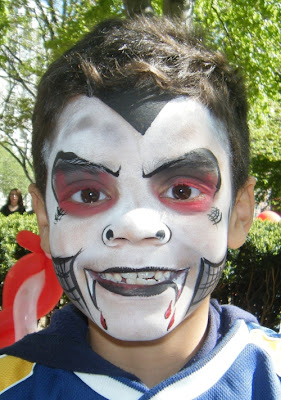 A little Eddie Munster-ish, but Eddie was supposed to evoke a vampire look so I'm OK with that.  This kid was absolutely ecstatic and his family wowed.  The initial reaction when he saw the mirror was, "Even better than I imagined it would be!"  Perfect reaction!
On the other end of the spectrum was this faerie princess, all shimmery and with hearts and rosebuds. 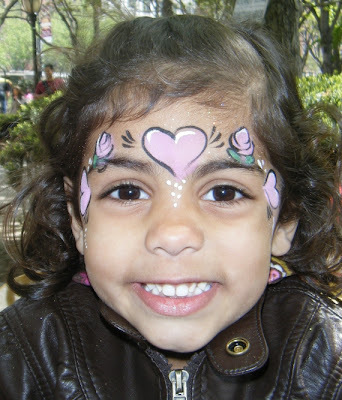 I did make a mistake.  I brought with m a Frappuccino and a Special K protein bar, but no sandwich or anything for lunch, and no water.  What was I thinking?  Especially the water - I always bring water!  In fact, I brought water for my face painting, but none for me.
Thankfully, the volunteers, organizers, and employees of the Tribeca Film Festival are phenomenal.  Not only did they get someone to help me carry my things into the park to set up, but they came by throughout the day to make sure I didn't need anything.  And the first one who came by, came with bottles of SmartWater.  Perfect!  As it is, I didn't even drink it all because I was really painting without any break at all, barely even for a swig of water.  Not the healthiest, but I always feel bad to stop when I see the line is so long.  I really need to treat myself better.  And when the volunteers asked if I needed anything else periodically, I really should've mentioned food; it was silly not to.
Ah, well, at least I took the time to snap a few more photos, like this whimsical full face flower that I painted upon request for this young lady. 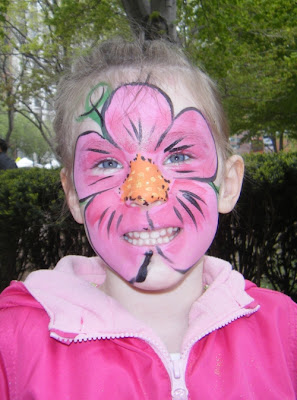 Interestingly, someone must've seen her and liked it also, because later on in the day I got another request for the same face!

Two of my other favorite faces of the day were both dragons.  The first request actually caused me to change from my standard dragon face to something entirely different.  A girl wanted a very girly dragon, in pink.  Okie doke.  So this is what I came up with. 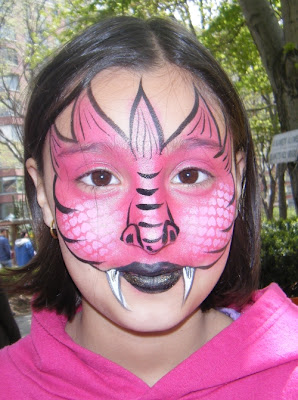 I even made the scales heart shaped!  That was a fun one.  So then later when another girl wanted a more traditional dragon, this one had an obvious influence on it. 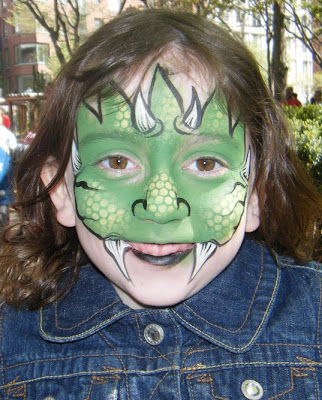 The crowd at the Tribeca Film Festival really is terrific too.  The kids were great, and I appreciated the parents, grandparents, and guardians who expressed concern for my well-being.  They're good eggs, all of them.

We did have one scare during the day, though.  A little boy, maybe four years old, was throwing some dirt at my table, which concerned me because I didn't want dirt and pebbles in the face paints, with the resulting potential to scratch my models.  I was able to get it cleaned out, but I really couldn't seem to get the boy's attention and have him stop.  And no adult would claim him!

I called the event organizer, now more afraid for a lost little boy than my supplies, and the Festival folk were able to reunite him with his parents' friends, who had taken him and his twin brother to the playground and hadn't noticed that he was missing.  Phew, crisis averted.

At the end of the day, my back was sore, my neck and shoulders stiff, but I was happy at the honestly absolutely awesome gig.  The people were wonderful - both festival people and patrons, I got to be creative despite the thousand butterflies and puppies I must've painted, and I had a blast.  Even fighting my way through the Holland Tunnel afterwards was worth it.
Posted by NJ Face Painter at 8:15 PM 2 comments: