I was contacted recently by Graftobian, a family-run makeup business based in Wisconsin and Brooklyn, to test some of their face paint products.

(All products tested in this post were received for free from Graftobian, but all opinions are mine.)

The primary focus of the inquiry was about their Disguise Stix Face Paint, which I'd honestly never heard of.

What they sent was a lot more than that... 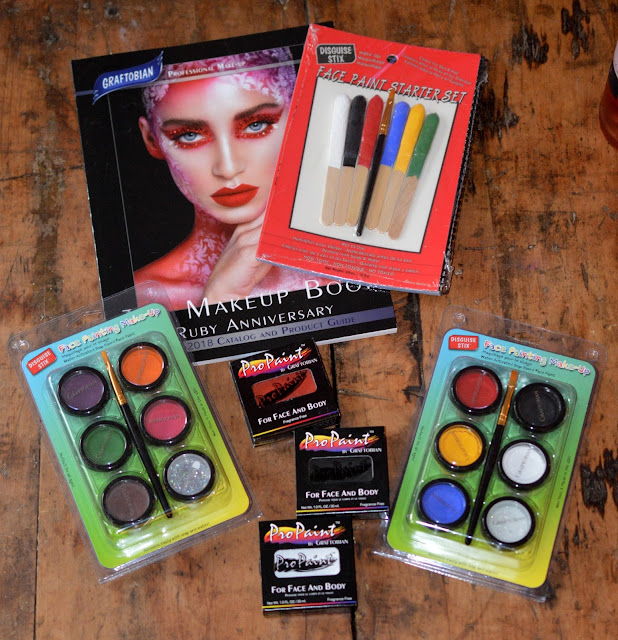 I tried out the Stix first, as that was the focus of the inquiry, which meant opening the book as well. 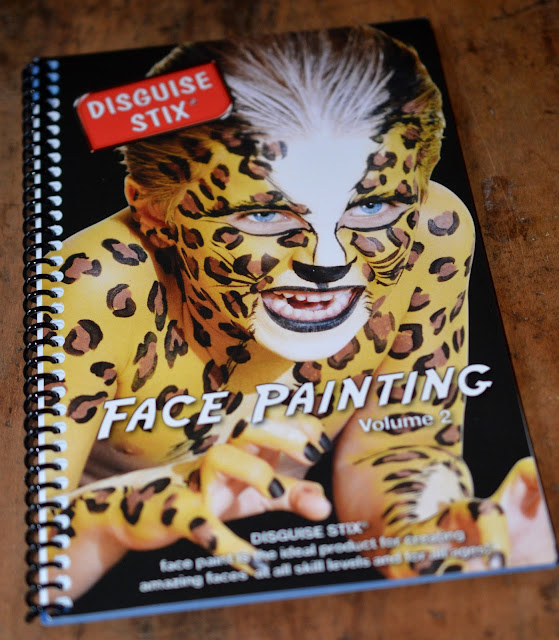 It's a really good book, with designs by Nick and Brian Wolfe, Donna Nowak, and Dawn Svanoe, rock stars of the face painting world, and instructions and tips for using the Stix, which I did read before starting.  I chose a design by Dawn Svanoe to try with my Stix, to see if it could really be accomplished with the product. 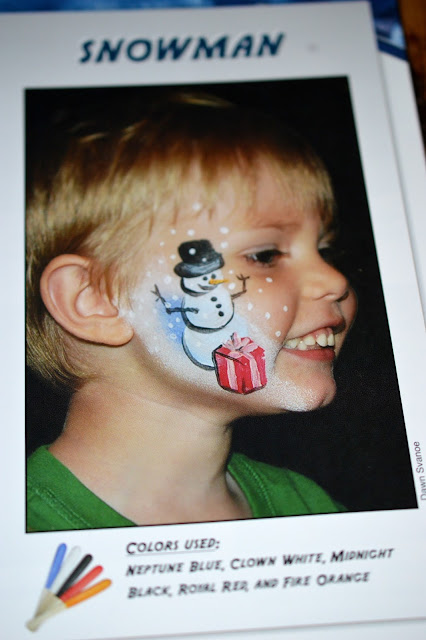 And I opened the Stix. 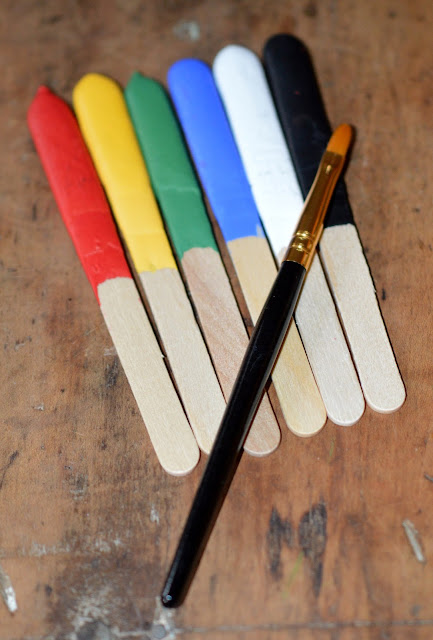 To use the Stix for this design, they are dipped in a water bin, and then a sponge or brush is used to pick up the saturated face paint from the stick to apply to skin.  I was pleasantly surprised to find how well they worked.  I'll be darned if my snowman, an anomaly in this week's constant 90-something degrees, didn't look an awful lot like the one in the book.  And the face paints blend astonishingly well, too. 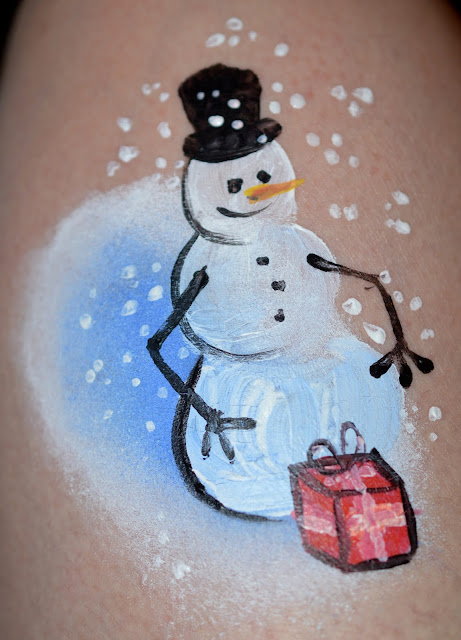 The book also suggested that the saturated Stix could be applied straight to skin to achieve highly pigmented stripes, or applied side-by-side to a sponge for instant rainbows.  It works! 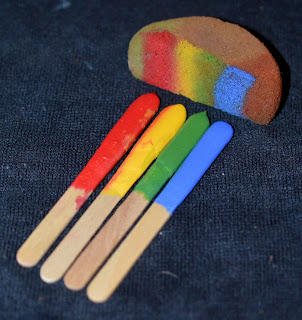 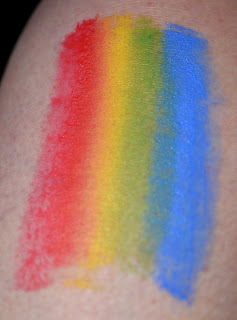 The one negative to the method of use for these is that dipping the Stix in the water bin makes for murky "coffee water," something every pro face painter works to avoid.  That said, it's a great product for home use, and even for kids to use on themselves or each other, where coffee water isn't such a concern because you're not spending 2-8 hours at an event with all different people.  I like 'em.

Then, I moved on to the pro colors, but we'll get to those in a minute, after I sidetrack to tell you about the part where I didn't read.

I opened the Face Painting Palette of secondary colors to check them, out, and decided on a small butterfly in pink and yellow, with purple details.

As instructed on the back of the package, I sprayed my water into the pink and yellow tubs of paint, and then dipped in my sponge to pick up the paint.  It was... weird.  The paint foamed and sounded squishy in my sponge, and I commented to Eric that it had a strange, soapy consistency.  I went ahead with my painting, and got this result. 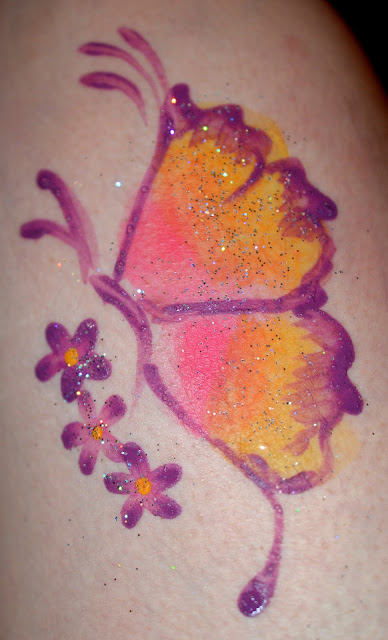 Not my best work, but not bad.  That soapy, foamy consistency threw me a bit.  And then I went back and read the front of the package again... or rather, for the first time, since as I've admitted... I didn't read. 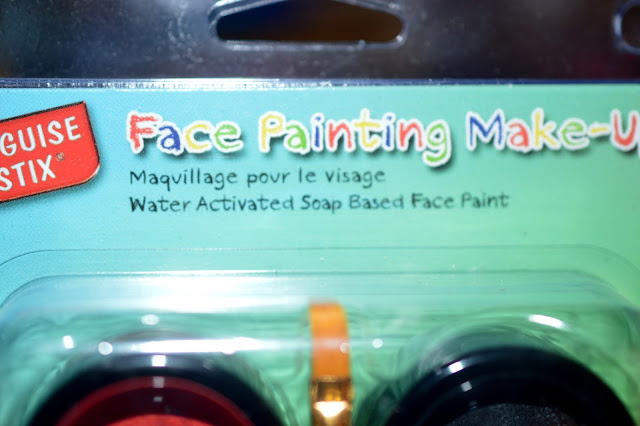 Oh, geez.  Soap based face paint.  Soap based.  It was right there.  For Pete's sake.  Well, that explains that!  I then went and looked back at the Stix, and wouldn't you know it, they're the same stuff!  The Stix didn't foam like the pots did, probably because I wasn't squishing a sponge down into them the same way, but it's the same stuff.

The Stix kit comes with six colors (a lot more individual colors are available on the Graftobian site), while the pot palettes are five, and each comes with the same small flat brush, but the palette kit comes with some downright amazing glitter.  It's in the sixth pot with a kind of shaker inner top. 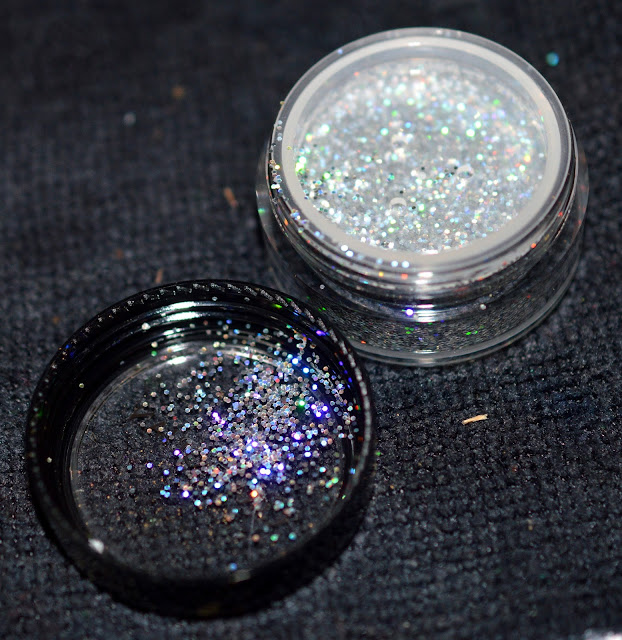 If you've ever used the loose mineral makeup, you know what I mean by that inner shaker lid.  Man, I love that glitter.

Pros and cons:  The Stix, oddly, were a bit easier to use.  I say "oddly," because it was a very different sort of delivery method of face paint.  So that's a pro.  The con with the Stix (besides coffee water from dipping) is the lack of a container in which to keep them after initial use, because they've still got a lot more life left.  I personally let them dry on a paper towel, and then put them in a plastic baggie.  Meanwhile, the glitter in the palette set is a huge pro.  It's gorgeous.  So is the fact that the paints come in pots with screw-top lids, so they're easy to close up and store between uses.  On other hand, they're a bit harder to use, and getting a sponge into the small pot honestly isn't so easy.  One pro to both is that they readily came off with just water and a paper towel, no additional soap necessary.

Still, either option is great for parents to use on their kids, or kids to use on themselves or each other.  They're FDA-compliant, made in the States (which if you're here, makes for a smaller carbon footprint than brands from overseas), safe, and really just fun.  I'm also reminded of those bathtub paints they made when I was a kid, only these could be used on skin and on the bathtub walls!

Next on to the pro paints.  Having been given red, white, and black, it was nearly a requirement that I try Spiderman.  Granted, I didn't try it on a face, but on my own leg.  I don't think I did a terrible job.  And then I tried a butterfly too.  Graftobian is a glycerin-based face paint, great for blending.  It goes on very nicely with a sponge, and has good coverage.  The red is bright, and the white clean and solid.  I did, however, have issues in getting the black to the right consistency for detail work. 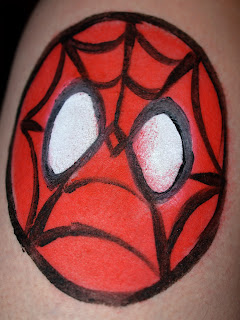 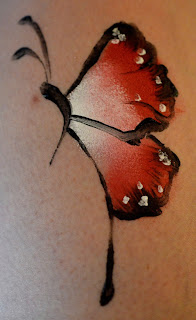 I just plain wasn't used to it, despite the number of different brand face paints I've tried.  So the only solution was to try again at my gigs on Saturday and Sunday.  Unfortunately, Saturday was brutally hot and humid, and I could barely get the face paints I use all the time to behave.  Sunday was an indoor event, and a cooler day.  The black, like the red and white, worked great for the creamy base of a batman face.  For detail work, I still had issues.

So there you have it - my experience with Graftobian products thus far.

Posted by NJ Face Painter at 8:00 AM No comments:

Or rather, I'm actually certified!  And though I may be nuts, it's not quite what you think.  I am an internationally "competency certified" face painter!  I am now accredited by FACE:  The Face Painting Association.

On July 6, last Thursday, I sat for an assessment, after completing a fairly detailed written application.  The written application asked about my supplies, my hygiene and business practices, the colleagues with whom I've worked, and what I do when someone asks for a design I've never tried (wing it!)... it was pretty in-depth.  I also had to submit proof of insurance, and a photo of my kit was sent to the panel.

The practical assessment, which took place on the 6th, consisted of me face painting three faces in a timed setting, to exhibit that I've got the core skills FACE deems necessary for competency certification.  Every applicant must complete one face with a solid white base, a two- or three-color tiger, and a three(or more)-color blended bases that results in a princess, an abstract design, or a land/seascape.  FACE is adamant that its members be able to achieve airbrush-like blended and completely solid matte bases, as well as good, sharp, varied lines, distinct edges, and good color choices.

If you check out my website, you'll know that these faces aren't entirely my style, but I crossed my fingers and hoped the judges saw what they needed to see.  Then I had to wait, and if you know me, you know I am not a patient person.  It only took 8 days to find out, but I'm in!  I found out just yesterday morning, that I am member #564.

So why did I do this, and what is FACE, you ask?  Excellent question, I say!

It's an international face painting association, started in 1994 in the United Kingdom, dedicated to promoting professionalism and skill within the face and body art community for the benefit of our clients.  To that end, the competency certification is offered worldwide.

As of this writing, I'm one of only four FACE members in New Jersey, and only fourteen in the entirety of North America!

Is certification necessary for face painters?  Nope.  However, when you hire a FACE member, you know that you've got someone who's passed a stringent accreditation test, has ensured that their work meets the benchmark set by the association, and has committed to continued learning and striving to improve those skills.  You know you've got someone who maintains high levels of health and hygiene to protect the faces they paint.  You can rest assured that you've got a face painter who is insured, and uses only products which have been approved for use on face and bodies.
Posted by NJ Face Painter at 8:00 AM 1 comment: