I painted this evening at a christening that could've been a bar mitzvah or wedding. It was at Macaluso's in Hawthorne, and the proud parents were hosting a big crowd. The DJ kept everyone busy, but as soon as I started to set up, the kids gathered. I didn't even put my table up before they were jockeying to go first.
The hit face tonight was the puppy, just like one I did at the birthday yesterday. No one even wanted a different sort of dog - a dalmation or a shih tzu - they were all about the hound-like dog I painted initially. I had two tigers, lots of peace signs, and a couple of other faces, but the one I actually liked best was on a teenager who just asked for a really small butterfly by her eye. 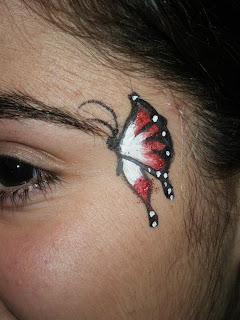 I can't peg exactly why I like it so much, but it strikes me as really clean, pretty, and simple. She was absolutely in love with it, and the customer's reaction always colors my opinion of the painting too. So that must be it also.

Posted by NJ Face Painter at 11:19 PM No comments:

A Day of Firsts

I painted today at two birthday parties. The earlier, in Wayne, was a first birthday, and it was a slow start. Lots of kids wanted to get painted, but no one wanted to be first. I find that every now and again. Well, this brave girl decided to run with it, and became a puppy. 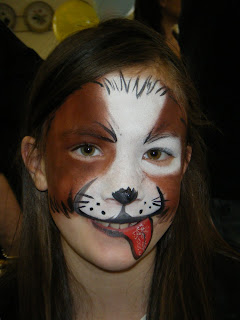 She was great, and the face was a hit That prompted her friend to join in, but she was more or less undecided as to what she wanted. She started talking around a fish, but didn't see how I could do it, so I suggested a fishbowl. 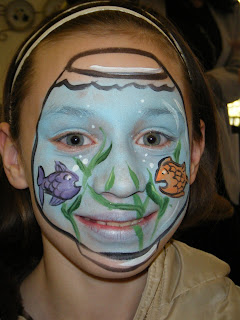 My first ever fishbowl! She loved it, as did everyone else there. Both girls took cards, and one told me that her dad said they might want me for her birthday too.

Meanwhile, a mom and dad of one of the kids each separately came over to book me for a party in early June!


After that, I got a couple of superheroes. Batman blinked, but they look great together. 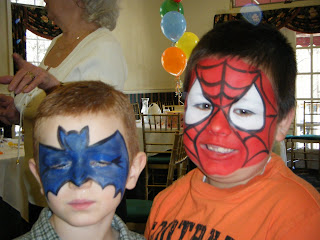 This boy had been afraid to get painted initially, and then pulled together the courage to do it. He was ecstatic with his train, and kept wanting to look at it, either in the mirror or just by looking down at his nose as best he could. 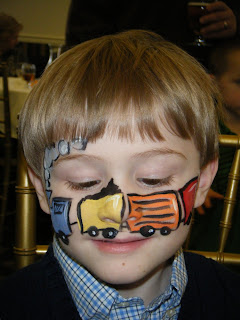 My next victim originally wanted to be a Power Ranger, but no one had Google access to get me a photo to follow. I admit that's one cartoon I've never watched. So he came up with a bear idea, and dad asked me to do a ferocious bear, rather than a cute teddy. I did my best to comply, right down to the snarling teeth and fish dinner. 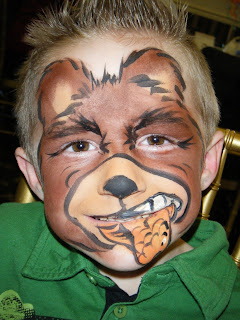 Last, but definitely not least, grandma wanted a bluebird on her collarbone. 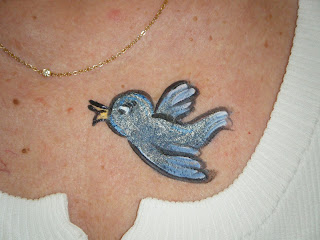 The shimmery blue I used was one of my new Fardel liquid paints, the ones I got from my Secret Santa in the UK. Now I'm truly addicted to them. It looked amazing in person, with a coppery shimmer that I loved!

It was just such a great party. Yes, it's a business for me, but more than the cash, I love it when everyone's into the painting and having fun. I love it when kids who are shy at first finally get up the courage to get painted and really enjoy it. I love it when adults are willing to join in the fun. And of course, I love it when people love the work I do. I won't lie, the ego boost is nice and I left the party feeling really happy and full of adrenaline.


The second party, in Lincoln Park, was a referral from the mom at this party last year! In fact, my Gene Simmons was at the party too, as was last year's birthday boy, who I'd painted as a pirate. He wasn't into getting painted this time, but his mom was. 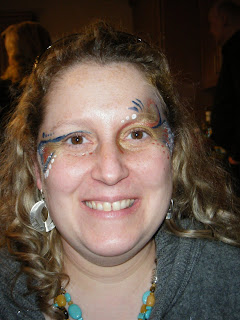 I got to play with my new Fardel paints again, too!


The birthday boy chose one of my favorite things to paint - a tiger. 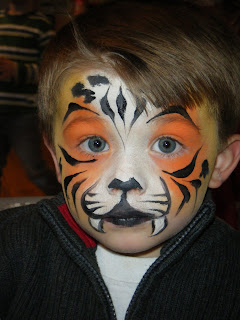 How cute was he? He loved it, and promptly became a tiger, growling and baring his claws at the other kids. Some other animals joined him in the jungle, though. Like a leopard. 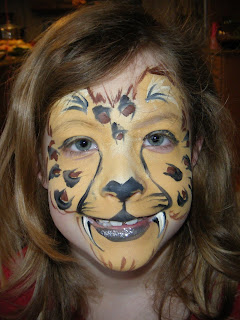 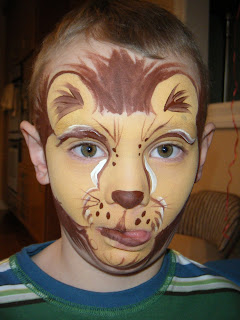 And even a mini tiger. I love it when the littles get painted! 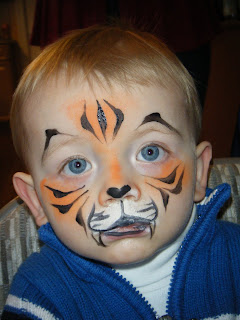 Once that cutie got painted, of course, other parents wanted to see if their kids would sit for me too, and they got even younger! Like this puppy, who was about 7 months. 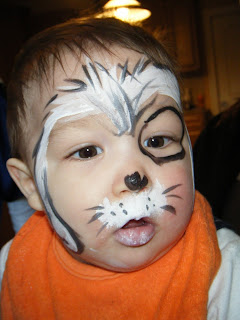 After that, the parents of this 4-month-old had to see if he could be painted too. I think he might be my youngest customer to date! 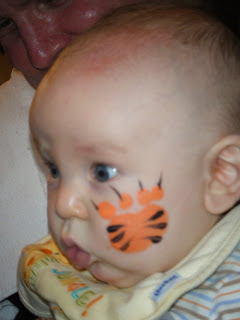 And I'm not sure that record will ever be beat.
Of course, not everyone was a jungle animal or tiny. We had a kitty. 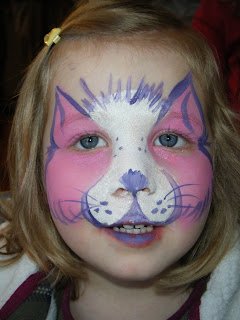 And a Giants fan, despite their current standing as 10th place in the NFC. 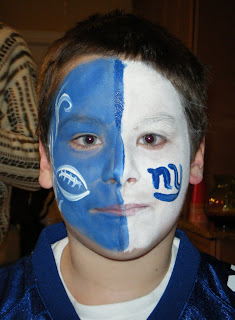 Another great party for a bunch of great people. All in all, it was a terrific day!

I'm a member of several worldwide face painting discussion groups. One is small enough, though international, and close enough, that we've become good friends. So a couple years ago, someone suggested a secret Santa exchange, and of course I wanted to participate. I love gifts - giving and receiving!
Our version extended past the holidays, into mid-January.

Yesterday, I was feeling really blech. My stomach was bothering me, and I didn't get anything done as intended. So when the doorbell rang and the dog went crazy barking, I was in even less of a good mood. When I got there, though, things got a lot better. I had a fat, padded envelope from a great face painter, Paula Southern, in the UK!

Wow, did I score! In addition to some awesome organic chocolate, a soap making book and some essential oils for our soaps and other bath products, a beautiful card to inspire my henna, 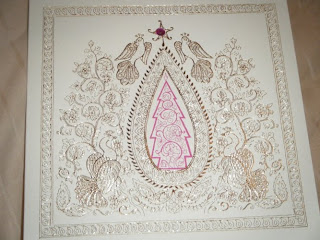 and some very cool bindis, 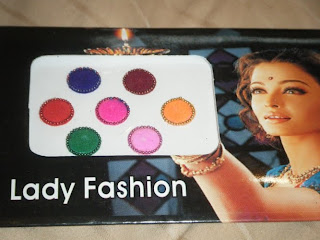 she sent me three bags of gorgeous shimmery cosmetic glitter. 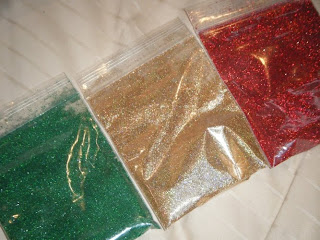 And on top of that, my personal favorite, she sent me six jars of liquid Fardel face paint! Just look at those amazing colors! The deep blue is already my favorite. 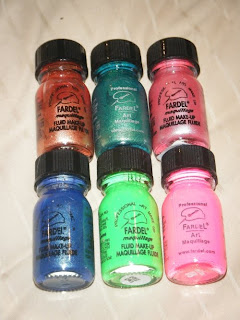 Fardel is a Belgian face paint company, still EU and FDA compliant, but hard to get here in the States. So this is HUGE for me. I can't wait until my next party on 1/23, so I can try them out!
Posted by NJ Face Painter at 2:10 PM No comments:

A Win for Face Paint!

Kryolan Professional Make-Up, a quality face paint and theater makeup company out of Germany, is now the first producer of a range of color makeup products to receive the Seal of Quality Approval from the European Centre for Allergy Research Foundation.

With the increase of the prevalance of allergies in industrialized countries, the European Centre for Allergy Research Foundation is working to raise the level of awareness ?poiyhdsxfgbjkl;]
\[-53q and research into allergies and relief therefrom.

The Foundation awards the Seal of Quality Approval for allergy-friendly products if the products have been shown to relieve and/or better the daily lives of allergy patients. Cosmetic products can receive this honor if they have been proven in laboratory and clinical tests to be especially well-suited for sensitive skin and patients with neurodermatitis.

Several Kryolan products, including their Aquacolor face paint line, were tested, and all received findings of "good" or "very good" with skin proving to be unchanged or improved after use.

Please do not confuse Kryolan makeup with Krylon, the company that makes industrial and spray paints. They are two very different things!
Posted by NJ Face Painter at 2:44 PM 2 comments:

Tips When Hiring a Face Painter

I don't know Anders Eriksson, but he makes some very good points I thought I should highlight for my readers.

If you can, know your face painter before hiring him or her for a party.

You do want someone who's good with kids, who can interact with them well, and who is neither bouncing off your walls nor standoffish. You want someone fun, but who can cotnrol the line and insist upon maintaining a "polite zone."

And you want to see samples of your face painter's work. Unfortunately, there are an uncrupulous few who lift the photos of others' work off the Internet and advertise them as their own work. Most painters who are willing to misrepresent their work in this way can't live up to their promises; they don't deliver the work the advertise. Again, always ask! It's worth it!
Posted by NJ Face Painter at 7:48 PM 2 comments: