This morning, a great couple came over to get painted before going to work. The husband wanted to be a full-headed scary Jack O' Lantern, and the wife just wanted purple streaks in her hair.
They came with their own orange, green, and purple hair spray, all prepared to go.

So I got to work on the husband, and this is what we achieved: 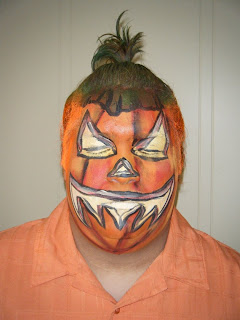 He and his wife absolutely LOVED it! After I finished this, I did the purple streaks in his wife's very dark hair. Subtle, but cool. Well, he was so excited, and she was so impressed, that he convinced her to get painted too. She just wanted a cool eye mask, something with tribal. 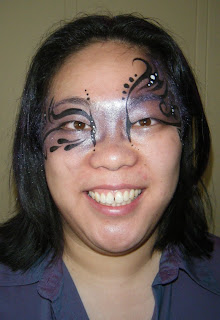 Then, this afternoon, I had another husband/wife team come by for paintings for a party tonight. They contacted me after seeing me paint their granddaughter at the Cabbage Night Festival on Saturday. The wife has a gold and black webby and gauzy dress, and a gold crown with various colored stones. She wanted to be a Butterfly Queen. This is she... 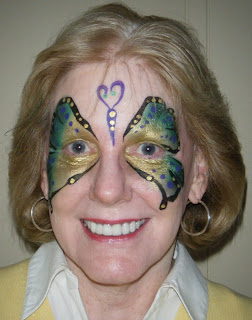 Her husband, on the other hand, went the opposite route. A man after my own heart, he got himself a black hooded robe and was looking for a skull face. 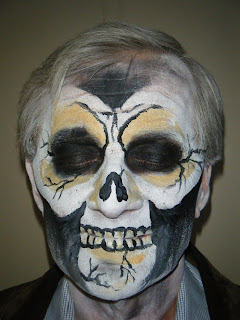 His wife sat behind him on a chair as I painted, and then he turned around. She literally jumped, she was so startled by what I'd done. They decided they couldn't go visit his mother today, because it might do her in!
Meanwhile, my pumpkin head emailed me, to tell me that the people at work were very surprised, and that security wouldn't let him in. He told them, " You know me man!! I've been coming here for years!!" A few of his co-workers got scared, and on the NYC bus it was hilarious. A few people spotted him on the bus and didn't want to get on! The bus driver was laughing so hard. He's been getting lots of stares and most people say, "Great job, who did it?" According to my client, "It's been so much fun man I haven't had this much fun in Halloween since 1998."
Posted by NJ Face Painter at 1:52 PM