... bake and make chocolates, just not all that frequently. So with my sister's baby shower taking place today, I baked the cakes and made the favors. Three chocolate lollipops in the shape of teddy bears with blocks per person. Why three? Mom and I decided that one looked too small and cheap. So three it was. With 52 guests, that meant 156 lollipops. I did 160 just in case.
The chocolate looked and smelled so yummy while it was melting! 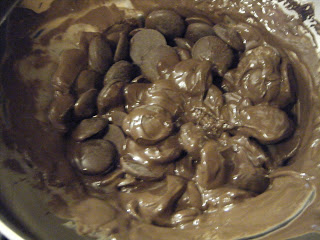 I had 4 of the mold trays, which helped to speed things along a little, but not enough for my taste. It still took hours and hours, over the course of two days. 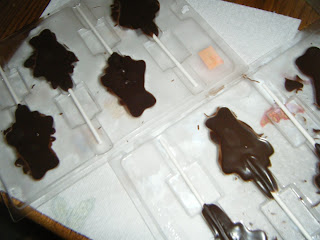 I used all dark chocolate, as it's healthier and my family prefers it. 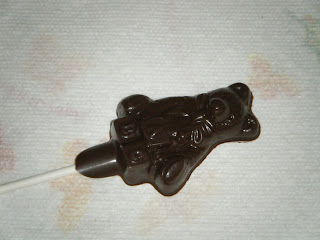 Once they were hardened in the proper form, I bagged each one and then tied it with a personalized custom ribbon. The toughest part was the ribbon, honestly. When they're printed, you've got to make sure the text faces the right way. It took some practice. 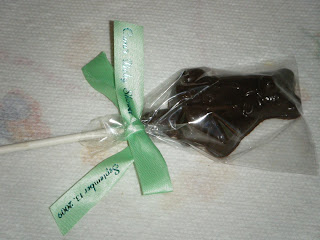 One of the boxes I had could only hold 106 of the pops, so the rest went into a different box. 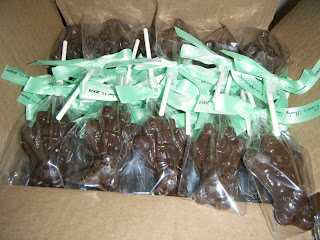 Yesterday, it was cake day. I used this pan 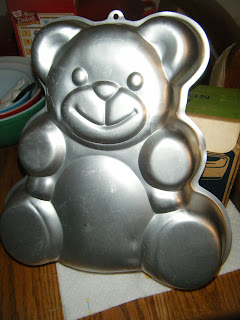 to make these cakes 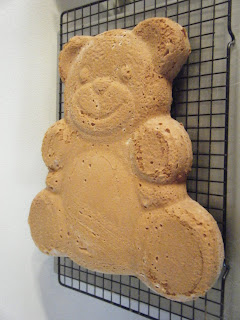 One a yellow butter cake and the other a fudge cake. I torted each so I could fill them with chocolate pudding that I cooked. For the yellow cake, I sliced bananas into the pudding, and for the fudge cake, I sliced strawberries.
One and a half batches of chocolate buttercream and one batch of regular buttercream (dyed lemon yellow and mint green) later, I had two shower cakes, sitting nicely on the cake board I'd covered in gift wrap... 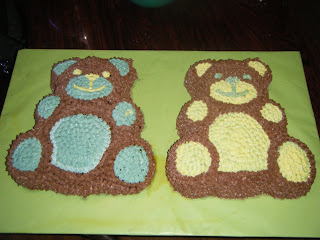 ... and a lot of dishes to wash! While I was baking, I thought my least favorite part of baking was greasing and flouring the pan, especially shaped pans like this. Then I got to the dishes, and they definitely win.
The chocolates and cakes were a hit, though. Everyone who didn't eat them at the shower took their lollipops, and both cakes were devoured, not a crumb left. Now THAT is a compliment.
Posted by NJ Face Painter at 4:22 AM