People ask me all the time how I got into face painting. It amazes me when I remember how I fell into this vocation.
I do have an art background. I'm fairly certain that there were art supplies waiting in my crib for me when I arrived home from the hospital after my birth. OK, that's an exaggeration. Maybe they were waiting in the closet until they were safe for me to use. I do know that I took my first art classes at a local NJ museum when I was 5. I know that I never went a year without art classes, even getting up an hour earlier than necessary to take "early morning art" during my senior year of high school because I was taking things like calculus and physics and political institute, but couldn't bear the thought of a year that couldn't fit an art class.
The first time I ever painted a face - a moving "canvas" was a whole new arena! - was when I was in college, between 1988 and 1992. I was a member of Starlight Foundation, an organization similar to Make-a-Wish. In addition to raising money to grant wishes for terminally ill children, we hosted pizza and face painting parties at a local children's hospital in Boston.
I remember one of those parties like it was yesterday. I remember going to the "congenital defects" ward first, and meeting a little girl, probably about four years old. She couldn't speak, so I had her point to some sample photos I had, and she pointed to the clown. I asked her, "You want me to paint you as a clown?" and she nodded yes. I started, but she kept rubbing the makeup from her face and trying to transfer it onto me with her fingers. Finally, I asked her, "Do you want to paint me instead?" and she nodded yes again. Emphatically.
I handed her the brush and my face paints, and she "scribbled" all over my face, my arms, my hands. I remember the nurses commenting that I was terrific for letting her do that, but as I saw it the point was to make her happy. Because we were using real face paints (i.e. makeup rather than craft paint), it'd be easy to remove at will. Finally, since I wasn't doing my share with the other children, I had to start moving on. This little girl took my hand and came with me, "helping" me with all of my other customers in that ward. She was a sweetheart and I hated to leave her.
We then went to the "behavioral problems" ward. Remember those troublemakers in high school? That's were these kids were likely headed, and so their parents would send them to live in the hospital and work things out with the docs. I honestly don't know how I feel about that, but I do know that I had fun painting them. They were all boys, from 10 to 14 years old, and one of the nurses told us that we were the highlight of their month. Really? A bunch of college geeks with some pizza and paintbrushes? How tough could these kids be? I wondered. They weren't, really, no tougher than any others. They just needed some help, maybe distance from their circumstances. One kid told me about how his older brother had been teaching him to steal hubcaps, for instance.
Another, though, another approached me and said, "Out of all the kids you could have visited in all the hospitals, thank you so much for choosing us." My heart melted.
That wasn't really the start of it, though, not really.
The start came many years later. It was September of 2003, and my friend's twins were turning 7. We were brainstorming inexpensive entertainment, and I remembered, "I have this clown costume... but I don't clown. I haven't juggled since college and even then I was just learning. I don't do magic. What can I do?" Aha! Insert light bulb graphic above my head. Face painting! Amusingly, I suggested to my friend, "You buy the paints, because you've got kids and you can keep them afterwards to use later. I'll never need them again." Famous last words.
I painted my heart out at that party, and the kids loved me! I trumped the pinata! I kid you not, there were children who refused to leave my line to go hit the pinata and get candy. I have no idea why. My painting then was... well... not so much up to par. Basically, I stunk. Don't believe me? Look! 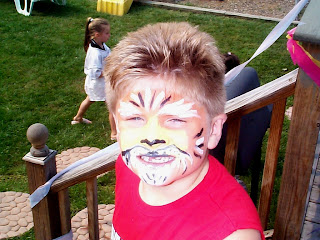 Yes, that was my very first tiger. Please contrast it with the very cute little girl painted as a tiger at the top of this blog, the one in the header. That is my newer tiger, as painted in 2008. It comforts me to see how I've improved.
That, however, is an aside. In 2003, this poor kid wore my very first tiger. And still I trumped the pinata. I simply cannot fathom why.
As planned, though, I did leave the face paint kit, an 8-color Snazaroo palette, with my friend for her use. It wasn't long after that, though, that I was telling another friend about the party... and this friend had a daughter turning four. You can guess what happened. Again, not taking the hint, I told her to buy the kit herself for me to use, so she could keep it. Again, I was sure I'd never need it in the future.
This time, though, people were asking me what I charged to do parties. Hmmm... Really? Now that is an interesting thought!
So... I bought myself an 18-color Snazaroo set and some Avery business card blanks, and called myself a "business." I started testing different markets and different arenas, and I've been up to my eyeballs in painting ever since.
Not only that, but I've expanded. I also do temporary tattoos... 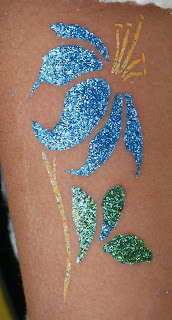 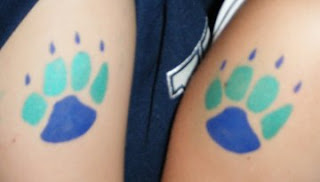 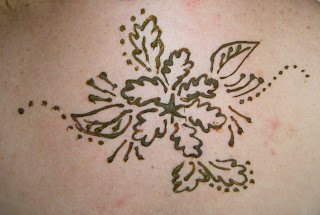 Plus, I've started teaching myself balloon twisting. My balloons are somewhat better than my initial foray into face painting, but then they'd have to be, wouldn't they?
Posted by NJ Face Painter at 6:29 PM